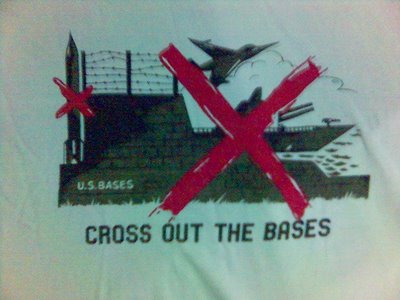 At left is the design of my shirt circa 1990's when I was active in the campaign against the ratification of the treaty that would have retained the United States' control over certain Philippine territories.

There were a lot of warning from pro-US bases advocate at that time that the Philippines or at least the communities around the US bases will suffer economic dislocation if the US forces withdrew from their bases in the Philippines.

These warnings did not happen partly through the efforts of the communities themselves who worked hard to overcome the loss of the American presence in their midst.

I would like to again thank the 12 senators who voted against the bases treaty.

Email ThisBlogThis!Share to TwitterShare to FacebookShare to Pinterest
Labels: America