...marriage is between man and woman and part of procreation and rearing of children.

Catholic strategy for the prevention of HIV infection can be summed up in 4 words, "Do not have sex".  Yet, the Philippine government via the Philippine Charity Sweepstakes Office gave a church based organization, AIDS-Free Philippines, 500,000 to 1.5 million pesos per year from the time of former President Estrada until 2009 to precisely promote this.

Which would have been bad in itself, promoting only the AB (Abstinence and Be Monogamous) without the C option (use Condom) for those who cannot do the AB is counter productive.  The catholic church has been trying to teach AB since before I was born and Filipinos are still begetting children before getting married and having sex outside of marriage.  So only promoting the first 2 options promotes the spread of HIV through ignorance.

But it's worse than that,  the AIDS-Free Philippines organization actively opposes the use of condoms,


“The discrepancy in the infection rates between the two countries, Thailand with severe condom- oriented programs and the Philippines without, has continued and only grown wider. As of August 2003 there were 899,000 HIV/AIDS cases documented in Thailand and approximately 125,000 deaths attributed to the disease. These numbers are many times those projected by the WHO (60,000-80,000 cases) in 1991. These numbers contrast sharply with those of the Philippines where, as of September 30, 2003, there were 1,946 AIDS cases resulting in 260 deaths. This is only a mere fraction of the number of cases (80,000-90,000) that the WHO projected would be reached by 2000.”31

The huge discrepancy continues, with Thailand having 610,000 [low estimate: 410 000; high estimate: 880,000] people living with HIV and death according to the UNAIDS/WHO. In contrast, the Philippines has only 8,300 [low: 6,000; high: 11,000] persons living with HIV. The numbers are even
more striking considering that the Philippines has a much larger population than Thailand.32
There is also more evidence from other countries that questions the effectiveness of condoms in the fight against HIV/AIDS. A study in Uganda by Kajubi et al. (2005) concluded that condoms were not effective at lowering HIV infections: “In this study, gains in condom use seem to have been offset by increases in the number of sex partners. Prevention interventions in generalized epidemics need to promote all aspects of sexual risk reduction to slow HIV transmission.”33
Dr Edward Green of the Harvard AIDS Prevention Research Project, in his book Rethinking AIDS Prevention: Learning from Successes in Developing Countries, contested the efficacy of condoms and HIV counseling and testing, the preferred prevention strategies of Western donor nations and the U.N.
Green said:

Tim Allen and Suzette Heald, in a comparison of AIDS policy in Uganda and Botswana, also noted:


“Promotion of condoms at an early stage proved to be counter-productive in Botswana, whereas the lack of condom promotion during the 1980s and early 1990s contributed to the relative
success of behaviour change strategies in Uganda.”35

Their opposition to condom use for the prevention of HIV infection boils down to, people do not use them correctly, therefore they are ineffective.  If used correctly, condoms provide up to 98% protection against HIV infection.  They argue that, behavioral change is more effective in preventing the spread of HIV,  we are not  disputing that, but correct and consistent use of condoms is also behavioral, what is the difference then? Then, there is the problem of what to do with people who are already infected with HIV,  are they barred from having sex the rest of their lives?  Condom use is the only way HIV infected people can have sex with their partners without overly worrying about infecting them.

So we have here an organization, that was funded by the Philippine government, supposedly dedicated to the prevention of HIV infection among Filipinos actually promoting the spread of HIV among Filipinos, now that is a waste of money.
Posted by Roy C. Choco, FCD at 3:38 PM No comments:

Email ThisBlogThis!Share to TwitterShare to FacebookShare to Pinterest
Labels: HIV/AIDS

A couple of weeks ago, I wrote about this guy who argued that the RH bill pending in Congress is "meddling of the State in matters of faith and morals, interference of the State in affairs of the family—the domestic church", nevermind that, even if the RH bill is passed into law, all Catholic's will still be free to follow their conscience and not use any contraceptive.

But just 2 days ago a catholic bishop was asking government to stop ceremonial marriages performed by a church in Baguio. According the the Philippine Daily Inquirer


"a Catholic prelate called on the government, on Sunday, to take action against same-sex marriages happening in the country as such matrimonies violated the law."

Nevermind that the marriages were ceremonial and not recognized by government,  nevermind that the ceremonies were performed not by catholic priests.  The bishop wants to meddle in matters of faith and morals of other people.

It seems that catholics can not bear it if their dogma is criticized but is able and willing to criticize others for their moral choices, even if that choice does not harm anybody else.
Posted by Roy C. Choco, FCD at 12:54 AM 3 comments: 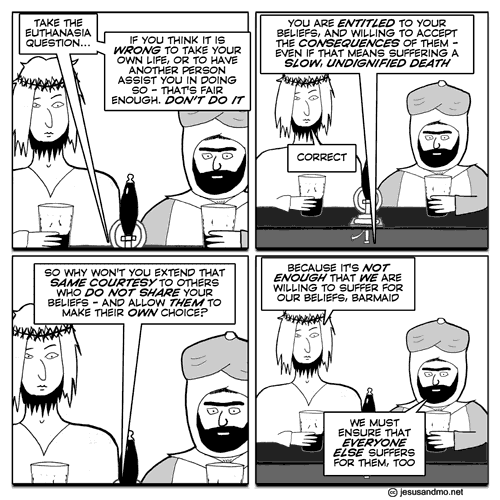 I think this is a nice follow up to the news that Terry Pratchett is preparing for his own death since a lot of people seems to have been freaked out about it.

Jesus and Mo is licensed under a Creative Commons License:
Feel free to copy for noncommercial purposes, under the same license.
Please provide a link back to jesusandmo.net
Posted by Roy C. Choco, FCD at 5:08 PM No comments:

I really feel bummed because of this

Sir Terry Pratchett, the author, has started the formal process that could lead to his assisted suicide at the Dignitas clinic in Switzerland.

The 63-year-old, who has a rare form of early-onset Alzheimer’s disease, said he had received the consent forms recently and was now considering whether to sign them.

Sir Terry, made the decision to request the forms after accompanying a motor-neurone sufferer to the Dignitas clinic for a controversial documentary to be screened on Monday evening on BBC TWO.

I have enjoyed many hours of pleasure reading his books.
Posted by Roy C. Choco, FCD at 8:22 PM No comments:

Jason Baguia wrote this screed titled Freedom in the time of practical atheism which is so full of stupidity I don't even know how to begin debunking it.  He begins by defining freedom which he defines as self determination and then enumerates the civil liberties we enjoy today as Filipinos which are "speech, of the press, of expression, of abode, to private property and others".

Then he goes off tangent with the crazy.


"Yet these same freedoms give us room to point out the many ways we are not yet free.

Many of us are still in the grip of poverty. A lot of politicians are still addicted to power and wealth. They perpetuate a culture of corruption and power plays that put ordinary people at a disadvantage. Cultural icons still adopt without qualms what is trendy yet harmful—like immodesty, rebelliousness and nihilism—in the West. Youngsters break through the fences of home only to get holed up in the labyrinth of the Internet.

These situations persist because many of us easily forget or take for granted that most valuable of all freedoms, a freedom that the priest Zechariah, father of Saint John the Baptist, sang of the day he named his son: The freedom to worship God “without fear, holy and righteous in his sight, all the days of our life.” (Luke 1:74-75)

The belittling of the freedom of religion has taken many forms but is seen today in the contraceptive promotion and divorce bills pending in Congress.

For all their talk about the separation of the Church and State, it’s ironic how few libertarians are standing up and exposing these bills for what they are: meddling of the State in matters of faith and morals, interference of the State in affairs of the family—the domestic church.

I will never be able to understand what is so democratic and healthful about promoting artificial means of contraception. Research shows that the use of condoms does not erase the risk of contracting sexually transmitted diseases. Countries where condoms are freely distributed actually end up with a higher number of HIV-AIDS patients."

What he is saying is that if the Philippines does not adopt the dogma of the catholic church, then there is no freedom.  How self absorbed is he that he cannot even conceive of the fact that not all Filipinos are catholic?  That not all of us want to follow catholic faith?  That precisely imposing catholic dogma on the rest of Filipinos who does not want to follow them makes us less free.

To him freedom of religion is freedom to impose his religion on all of us,  and he has the gall to invoke the memory of Dr. Jose Rizal.  The Dr. Jose Rizal who was executed by the catholic church as a heretic for going against catholic dogma.

Freedom, he keeps using that word,  I don't think it means what he think it means.
Posted by Roy C. Choco, FCD at 11:45 AM 3 comments:

Email ThisBlogThis!Share to TwitterShare to FacebookShare to Pinterest
Labels: catholicism 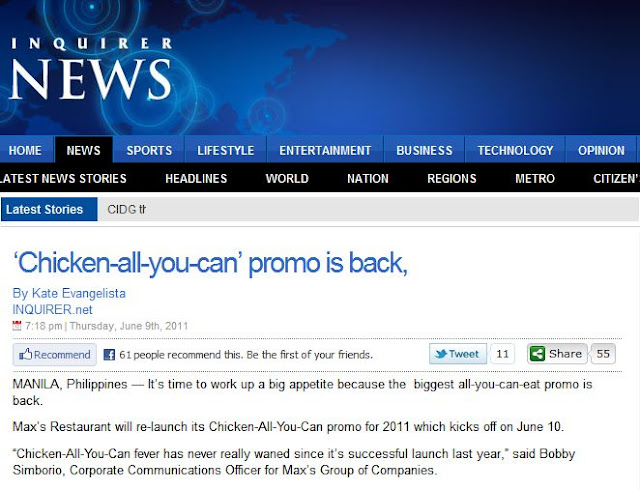